HUNTINGTON BEACH – When is a 180-degree ocean view from Pacific Coast Highway not a major plus for business in Huntington Beach? When you’re trying to help a movie theater stay in business, like Joe Daichendt and his father have for the past seven years.

The Daichendts own Pierside Pavilion, the retail plaza steps from the sand and downtown. Joe Daichendt is moving forward with a plan to transform the building – once the home of a six-screen movie theater – into a center for retail, restaurants and offices. A movie theater on the sand is an echo of the past, said his father, Gary Daichendt. 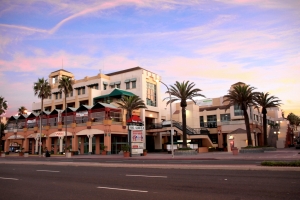 “It was a popular concept in the ’80s that a theater by the ocean could attract people,” Daichendt said at a recent City Council meeting. “And the joke now in the theater industry is ‘fish don’t bite tickets.’ ”

The council has approved a partnership between the city’s redevelopment agency and Pierside Pavilion to redevelop the property. This will be accomplished in a two-phase plan that will eliminate the movie theater and redesign the building’s interior to accommodate and attract new businesses.

Discussions to close the movie theater began in 2005. Two other companies have operated the theater since Pierside Pavilion LLC bought the property in 2002. After the third company vacated in 2003, Gary Daichendt said they could not attract another company and movie operations were shut down in 2006. The market was changing and the theater was struggling – the equipment was not state-of-the-art, its six screens could not compete with other larger local cinemas, and beach traffic was an inconvenience.

“You can’t sell those tickets out in the ocean. While the ocean makes a phenomenal view, it’s a difficult business model for a movie theater,” Joe Daichendt said. “(People) don’t travel to the beach to go to the theater, and you don’t drive to the Inland Empire to go to a surf shop.”

But Joe Daichendt hopes that the ocean will work to his advantage for new plans for Pierside Pavilion. Current plans for the property envision a ground floor of retailers, an upscale restaurant on the second floor that will take full advantage of the view, and two floors of office space on top. This will come in the second phase of the project, which is contingent on the adoption of the city’s downtown specific plan by the council and the state Coastal Commission.

Council members expressed concern that the plans continue to allocate space for a nightclub and restaurants that serve alcohol, but Gary Daichendt assured them that he would not allow bars on the property. Councilman Devin Dwyer said the city should approve the agreement since past efforts to attract a movie company were unsuccessful.

“I hate going back and changing deals, but it just it sounds like we’ve gone as far as we can to try to make this work,” Dwyer said. “I hate to see the change but having vacant space there doesn’t help.”

The council voted unanimously at the July 6 meeting to impose a $50,000 fine for each year Pierside Pavilion LLC delays the plans in the approved agreement. The first phase of the plan is beginning immediately and timely revitalization of Pierside Pavilion is in the best interests of the city as well as their own, Joe Daichendt said.

“(This agreement) will make Pierside Pavilion the appropriate front door to downtown that it was always intended to be,” Joe Daichendt said.