Next Article
Organic Chef To Go

It may be called Surf City, but for many residents, Huntington Beach is the home of the Golden Bear.

Since the Bear’s demise in the late 1980s, some residents have been waiting, or actively plotting, its return — and now Ladera Ranch resident Joe Daichendt, the co-owner of Pierside Pavilion with his father Gary, is trying to bring a Golden Bear concert venue to the city in summer 2011. 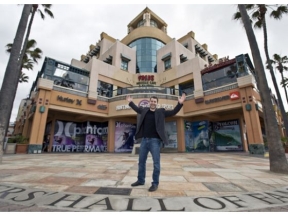 The Golden Bear was a music venue where the likes of John Denver, Jimi Hendrix, Bob Dylan and Steve Martin all played to an intimate crowd.

The Bear started out as a restaurant in 1929, but grew into a rock-and-roll legend in 1963. The who’s-who of music played in the ocean-side venue until it was demolished in 1986.

Although Daichendt wants to build his venue in almost the exact spot it used to be, he isn’t bringing the Golden Bear back, he said. At least not yet.

“This is today’s Golden Bear,” he said. “This isn’t the reopening of the Golden Bear.”

Daichendt is in negotiations with the family of the original owners for the rights to the name, but until then, it’s just another venue, he said.

The $2-million, about 7,000-square-foot facility would house as many as 400 spectators in a Chicago-basement-style theater, similar to San Diego’s Gaslamp Quarter.

Patrons would dine on authentic Chicago-style food, and the facility is requesting a full liquor license. Residents would enter the Bear by ascending the bright red steps leading to Fred’s Mexican Cafe, and directly inside, Daichendt wants to display surf and oil memorabilia to commemorate the city’s unique history.

The venue would cater to local up-and-coming bands and comedy shows. It could also host big-name acts, but it wouldn’t be trying to compete with the bigger venues.

“This is not trying to compete with the Grove. The idea is to bring relevant, local talent through the space,” he said.

To bring the Bear back to life, Daichendt has to obtain various permits, including one for alcohol, which has to be approved by the Police Department. Daichendt said he recognizes downtown residents will have concerns about the alcohol license and parking issues, but said he plans to work with the residents and be a good neighbor.

“We will be chatting with residents in the area,” he said. “We want to hear concerns and communicate our plans.”

Kim Kramer,spokesman for the Huntington Beach Downtown Residents Assn., announced Daichendt is trying to bring back the Bear at a Town Hall meeting March 4.

“I don’t know of the last time a developer worked with the residents,” Kramer said at the meeting, adding later that “everyone wants to see the Golden Bear come back, but come back in a way that’s compatible with residential life.”