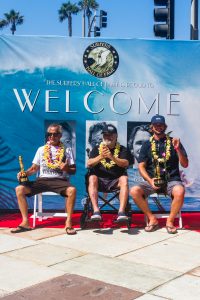 HUNTINGTON BEACH, Calif. – Friday, August 3, 2018 – Under clear skies and against the backdrop of a standing room only crowd, the Surfers’ Hall of Fame today inducted Ben Aipa, Herbie Fletcher and Brett Simpson.  All three of the 2018 inductees now have their hand and footprints immortalized in cement for the ages in front of Huntington Surf & Sport at the corner of PCH and Main Street.  Further information is available at http://hsssurf.com/shof/.

Ben Aipa, the legendary Hawaiian surfer and shaper founded Aipa surfboards in 1970, invented the double-edged swallowtail and split tail designs and served as informal coach and trainer to top surfers Michael Ho, Sunny Garcia , Brad Gerlach and many others.  Leader of the Fletcher surfing dynasty, Herbie Fletcher built Astrodeck into the sport’s most popular surf accessory, produced the storied Wave Warriors video series and led the tow-in movement on Oahu’s North Shore.  Brett Simpson, the son of a former pro football player became the first back-to-back winner of the prestigious U.S. Open of Surfing, won “Rookie of the Year” honors at the Triple Crown of Surfing and was twice named the Orange County “Surfer of the Year.”

Following a cememonial blowing of the conch shell and traditional Hawaiian prayer performed by Ben Aipa’s son Duke and his daughter, Sher Pai, wife of Surfers’ Hall of Fame founder Aaron Pai, blessed the ceremony.  HuntingtonBeach Mayor Mike Posey warmed up the crowd by saying, “Everyday I wake up I thank my lucky stars that I’m mayor of the coolest city.”

Event emcee Todd Kline, a former pro surfer, introduced Aaron Pai and the festivities were formally underway.  “AP” wished his mother a happy 91stbirthday then greeted the industry, surfing royalty, dignitaries and the inductees themselves.  “Styled after the Grauman’s Chinese Theater, inductees into the Surfers’ Hall of Fame have contributed greatly to advance our sport.  Herbie, Ben and Brett, you guys are about to get a little concrete on your feet and hands.”

The first inducteed was Herbie Fletcher.  Born in Pasadena in 1948, Herbie Fletcher began surfing at age nine and has strong ties to Huntington Beach having gone to the legendary Huntington Beach High School.  Herbie was a semifinalist in the 1966 World Surfing Championships and by the end of the 1970s, he had purchased Astrodeck, founded Herbie Fletcher Surfboards in Dana Point and was among the leaders of the longboard resurgence. In the mid 1980’s Fletcher ventured into surf videos, releasing Wave Warriors, a series of promotional videos for Astrodeck.  Herbie was on the vanguard of the tow-in surfing movement, riding 25-foot waves at Waimea Bay on his Kawasaki Jet Ski and in 1987 he towed in Martin Potter, Tom Carroll and Michael Ho into 12-foot waves at Pipeline.

Eleven time world champion Kelly Slater, unable to attend, sent a text to Todd Kline stating, “Herbie was responsible for creating deck pads, something almost every surfer uses today.  The Fletcher’s are synonymous with surfing.  All wave warriors owe a debt of gratitude for them pushing the boundaries of the sport.”

“I love surfing so much,” said an elated Herbie Fletcher. “Hobie Alter have me my first job then Bruce Brown put me in one of his surf movies.  “With the money that I saved, I gave up my life to go to Hawaii and surf.”  Herbie carved a cool little wave into his concrete tribute.

Next up was Ben Aipa.  Born in Honolulu in 1942, legendary Hawaiian surfer and shaper Ben Aipa was a finalist at the Duke Kahanamoku Invitational Contest at Sunset Beach in 1966 and finished fourth in both the 1967 Makaha International and the 1975 Lightning Bolt Pro. However, it’s as a surfboard shaper that Ben made his most significant imprint on the sport, making the board that fellow Hawaiian Fred Hemmings used to win the World Championship in 1968 and then founded Aipa Surfboards in 1970. Ben invented the doubled-edged swallowtail design in 1972 and followed this with the split-tail design in 1974. Aipa also has served as an informal coach and trainer to such top surfers as Michael Ho and Sunny Garcia. Surfing magazine named Ben one of the Top Ten Shapers of All-Time in 2004.

“I was coached by Ben since I was 11 years old,” said 2000 world surfing champion Sunny Garcia.  “I am blessed to be part of his life, always being coached, always being loved and always driving him crazy.  I wouldn’t miss this moment for the world, watching him get inducted.”

Slater also passed along cragraulations for Aipa texting, “Ben Aipa is one of may all-time heroes; always a supporter and always a friend.  Since I grew up with Akila (another of Ben’s sons), I always felt like a part of his family.  I love you and appreciate you.”

“Being a part of Huntington Beach is a part of my life,” Ben Aipa stated.  “I really enjoy knowing that I can see my name there and jump all over it!”  After placing his hands and feet into his patch of wet cement, Ben Aip wrote, “Aloha, sting it.”

The day’s final inductee was Brett Simpson.  Born in 1985 in Long Beach, Brett “Simpo” Simpson grew up in an athletic family headed by his father, Bill Simpson, a tough defensive safety with the Los Angeles Rams in the 1970s. When Brett was 12 years old, he and his friends decided to give surfing a try. Brett’s style caught the eye of Andy Verdone, legendary coach of the Huntington Beach High School surf team. Brett’s career reached stratospheric heights when he defeated reigning World Champion Mick Fanning to win the 2009 US Open of Surfing. The following year, Simpson defeated legendary world champion Kelly Slater to become the first surfer to win back-to-back U.S. Open Championships.

“Bill Simpson called me about Brett enrolling in school and I was stunned because I was a fan of football and knew of Bill,” said Coach Andy Verdone.  “I just want him to have the best he said.  I’m turning him (Brett) over to you now.”

Aaron Pai (and Huntington Surf and Sport) supported Brett from day one and had this to say, “ He’s the best ambassador for the sport of surfing.  He rips in the water and on land.”

Bret, who carved “Keep it Simpo” into his stone, said “This passion that I have for surfing took over my life.  Those U.S. Open wins out here were surreal to this day.  I’m blessed.  I’m honored.  Thank the lord.  And thank Huntington Surf and Sport for being the most core surf shop in the world.”

Highlight Quotes from the Ceremony:

PT: “Herbie was responsible for the resurgence of longboarding in the 1980s.

Sunny Garcia: “I stayed with Nathan and Christian (Herbie’s son’s) in Hawaii when I was 13.  Little did I know that they were vegetatians and I’m a meatatarian.  The Fletchers are still inspiring to this day.”

Walter Hoffman: “Herbie is a great son-in-law.  We still surf together whenever possible.

Nathan Fletcher: “It’s a great honor to be his son.  Thank you and I love you dearly Dad.”

Bob Hurley: “I always try to model my surf stoke after Herbie Fletcher.

P.T. “Ben Aipa had a great impact on the shapers in the 1970s.  We all built swallowtails and stingers.”

Michael Ho: “Ben is like my other Dad.  He was my first real sponsor.  Ben is a true man that took care of a lot of surfers.  He taught all of us how to surf.”

Duke Aipa: “Dad, you’ve touched the hearts and souls of so many.  You’ve made me the man that I am today so I can raise my kids the right way.  You are my idol.”

Bill Simpson: “I remember vividly the 2009 U.S. Open.  I thought, could they really be happening?  It really was and was a career making moment for him.  It’s been a great ride and I couldn’t be prouder of him.”
Bob Hurley: “I’m so proud of you (Brett).  Your competitive journey has been a fairy tale.  Congrats and welcome.”

The nation’s first imprint collection of legendary surfers, the Surfers’ Hall of Fame celebrated its first induction in 1997 inside of specialty retailer HuntingtonSurf & Sport where several slabs remain.  Four years later with the blessing of the City Council and a stunning bronze statue of Duke Kahanamoku serving as a backdrop, the ceremony moved outside to the corner of PCH and Main, less than 100 feet from the famed Huntington Beach Pier, site of the Vans U.S. Open of Surfing.