When Pierside Pavilion was being built across the street from the Huntington Beach Pier in 1989, Aaron Pai knew he would have a battle on his hands — not to keep it out, but to get his business in.

“We fought hard to get into this location,” said Pai, the owner of Huntington Surf and Sport. “We fought a huge corporation with tons of stores.”

To rally community support, Pai stood at the corner of Goldenwest Street and Pacific Coast Highway asking people to sign his petition. Hundreds signed it and Pai brought it to the mayor.

Twenty-six years later, Huntington Surf and Sport not only has a lease, but the current building owner, commercial real estate firm Theory R Properties, is renaming Pierside Pavilion after the shop, which sells surf clothing, surfboards and related gear.

“Everyone knows it by Huntington Surf and Sport and the Surfers’ Hall of Fame,” said Gary Daichendt, who founded Theory R Properties in 2002. “Their business is extremely successful and family-oriented. They’re just a great family.”

– Ashlyn, Taylor and Aaron Pai are the owners of Huntington Surf & Sport. (Scott Smeltzer / Weekend)
The renaming is part of a $10-million renovation that has been more than five years in the making for Pierside Pavilion, which houses Diane’s, Fred’s Mexican Cafe and other retail businesses.

The renovation, to be completed in summer 2017, will include converting the former theater into office space, expanding out the storefronts and building a 30,000-square-foot tower that will house office and retail space and a restaurant with ocean views.

Pai said he is honored to have Pierside Pavilion renamed after his business.

“What an iconic building to have our name on,” said Pai, who now owns four Huntington Surf and Sport stores, all in Huntington Beach. “We’re on the corner of Main Street and Pacific Coast Highway. We consider it the epicenter of the surfing world right here.”

Aaron Pai, owner of Huntington Surf & Sport, looks at a photo of his son Taylor surfing at the company’s office in Huntington Beach on Tuesday. (Scott Smeltzer / Weekend)
In many ways, Huntington Surf and Sport is synonymous with the history of surfing, housing the first inductees of the Surfers’ Hall of Fame in 1997. In 2002, the means of honoring legends of the sport in the form of handprints and footprints extended to the sidewalk outside the shop.

“Surf runs deep in Huntington Beach,” Pai said. “There’s really nowhere else like it in the world.”

Pai, who moved to California from Hawaii at the age of 1, was surfing at Huntington Beach when he was approached about working at a new surf shop called Huntington Beach Surf and Sport, which at the time was on 15th Street at Pacific Coast Highway.

A year later, Pai went from being the store’s first employee to becoming store owner when the previous owners wanted out.

“I always wanted to run a surf shop,” Pai said. “I dreamed of it as a little kid and in my teens. I even went to Orange Coast College to learn business.”

His father, a structural engineer, and his mother, a teacher, lent him the $60,000 to buy the business.

“I was 23 years old — scared, so scared,” Pai said. “That was a lot of money for them because they scraped for every penny.”

It was a family business from the moment Pai purchased the surf shop in 1979, which back then was a shack that sold a few surfboards, surf waxes and clothing.

His parents worked with him behind the scenes to grow the business. That help continued even after Pai vacated the 15th Street location in 1994.

His father designed many of the Pierside Pavilion shop’s elements, including a rock archway where an octopus sculpture is still perched and the mezzanine that houses the store’s Java Point cafe.

Surf memorabilia and a large photo of his son Taylor catching a massive wave in Newport Beach decorate the shop. On a recent day, a long-haired man was scraping wax off a surfboard not far from a table of neatly folded sweatshirts. 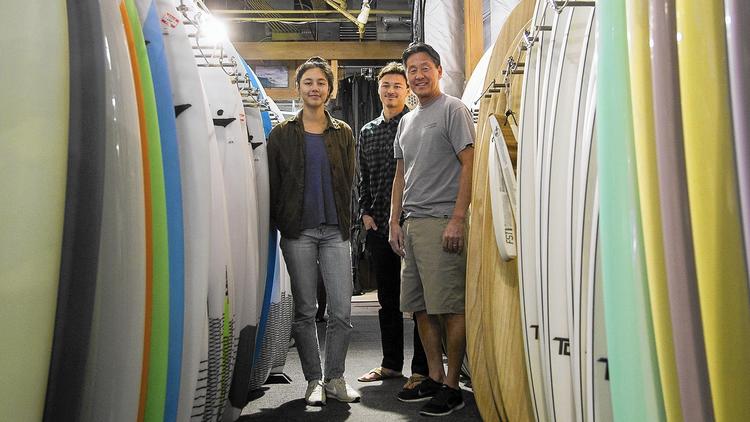 “The love of the sport is built into the foundation and into the walls of the store,” Pai said.

“We would walk through the surf shop every morning at about 5:30 a.m.,” said Taylor Pai, 26, who recalled going to work with his father as a boy. “You could smell the wax and the rubber from the wetsuits. Then we get to go surfing. We get to do that to this day, which is pretty special.”

“There’s a lot more creativity and innovation between surf brands and surf culture and the young kids, whether it be shaping your own board or coming to the shop to talk to our staff about surfboard design and what goes into a surfboard,” he said.

“And that’s on our side,” she said. “We’re not a franchise or a chain. We are family-run and us sticking to that … provides a long-term steadiness.”

Aaron Pai said he still feels the same excitement when seeing new surfing products come through his store as he did when he started the business nearly 37 years ago.

“We’re just lucky and fortunate enough to be able to make a living and live the surfing lifestyle,” he said.