HUNTINGTON BEACH, CA. (Dec 1, 2012) – Huntington Beach-based advertising firm Grupo Gallegos, widely known for its award-winning Spanish-language campaigns, has been named to Inc.’s list of the 20 World’s Coolest Offices. The honor puts the decade-old company among some of the planet’s most recognizable brands, including heavy hitters Twitter, Urban Outfitters, Microsoft and Google.

Any savvy executive knows that a good marketing campaign – Skittles’ Taste the Rainbow, All State’s 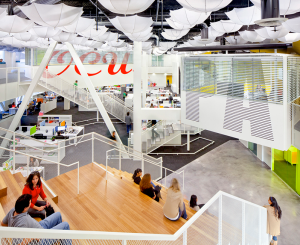 Mayhem is Everywhere and Dos Equis’ The Most Interesting Man in the World are but a few examples – can’t come to fruition without a fun, vibrant environment that fosters brilliant creativity. Conversely, such ideas rarely come about in a dull, conventional environment.

Looking at the workspaces used by Inc.’s other top 20 choices, there’s an obvious thread that connects each company, no matter how different their business model or industry sector: wide open, collaborative spaces.

In describing the company’s workplace paradise, company founder John Gallegos says that it’s all in an effort to promote creativity and collaboration among employees, which is an integral aspect of Grupo’s DNA. In addition, the office’s basketball court, ping-pong table, lounges, kitchen and video game areas are extra perks.

While the additional benefits might seem like unnecessary distractions, the company’s open space and team-based culture is working out quite well. With an extensive clientele list that includes Energizer, Target, Petco and Comcast, Grupo is fostering a domain that’s allowing company staff to create campaigns for some highly regarded brands. GrupoGallegos.com